Although most of my work as a scholar touches on the history and theology of the Stone-Campbell Movement, I do enjoy dipping my toes into other academic waters on occasion; this blog is typically where those musings wind up. Recently, however, I helped organize a panel proposal for the upcoming Conference on Faith and History that focuses on the connections between religion and the workplace in modern American history. While we are still waiting to hear whether the proposal will be accepted (and, I suppose, whether the conference will be able to proceed in general), my contribution to the program is an analysis of the spiritual and supernatural within the popular comic strip Dilbert. To wit:

“Whatever Foucault, Diogenes, Bacon, or Kant might have to say about Dilbert, there is yet another side of the strip which has, so far, been overlooked in the relevant scholarship—the powerful impact of the divine in and on the strip’s depictions of modern corporate life. The Dilbert comic and related materials (including the TV show) are saturated with the supernatural. Angels, demons, ghosts, spirits, cosmic entities, and perhaps even God all play important roles in various story arcs from throughout the strip’s run. Too, there is a remarkably fleshed out system of divine justice within the strip’s universe, belying the joking but ultimately inaccurate characterization of Dilbert’s office as either Hell or Purgatory. And aside from the strip’s in-universe cosmology, real-world religious and political events, such as the collapse of the Soviet Union, have impacted Dilbert’s plots in their own right. The spiritual landscape of Dilbert, then, is not the soul-crushing or even soulless aridity of the cubicle farm. Rather, it is a vibrant realm, populated by all sorts of supernatural beings and shaped by its own in-universe cosmology and by real-world history.”

Though the presentation, panel proposal, and conference all still connect to matters of faith, working on this small Dilbert project inspired me to do a bit of related reading in the world of organizational theory–in particular, returning to two satirical but insightful books I read years ago: The Peter Principle by Laurence J. Peter and Raymond Hull, and The Dilbert Principle by Scott Adams. I did major in political science as an undergraduate, after all, with an informal concentration in public administration, so I’m not a total neophyte. 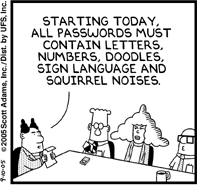 For the uninitiated, the general thesis of Peter’s and Hull’s 1969 work is that organizations are often structured in such a way that employees who succeed at a given task will continue to be promoted up the corporate ladder until they eventually reach a job they are unqualified for–their own personal “level of incompetence.” Imagine, for instance, a phenomenal engineer who is promoted to management on the basis of an extended track record of engineering successes, only to find that the skills require to build bridges and the skills required to oversee other human beings are not necessarily the same! This trend has obvious negative consequences for the individual employees, who might find themselves out of work, and also for the organization as a whole, since employees who might have been productive in their previous positions may now be actively (if unintentionally) harmful to the organization.

The “Dilbert principle,” first articulated in 1995 and fleshed out at book length the following year, identifies the same symptom as the “Peter principle”–managerial ineptitude–but offers a significantly different diagnosis. Adams proposes that incompetent entry-level workers are often promoted up the chain of command to reduce the amount of damage they can inflict on their employers through said incompetence. Why are these employees promoted rather than fired, though? Firing an employee requires admitting that a hiring process failed, and most people, HR staff included, would rather not admit that they made a mistake. Promoting someone to a supervisory or advisory role, according to Adams, moves that employee one step further away from the organization’s meaningful work and allows the people who made the hire to save face. Everyone wins, except of course no one does.

Many of the impressionistic arguments in Peter’s and Drucker’s satirical work have been given serious scholarly footing to stand on (1), and the “Dilbert principle” has likewise been the subject of meaningful academic inquiry. (2) I tend to find the “Peter principle” the more persuasive of the two frameworks as a whole, though I also appreciate Adams’s more thorough evaluation of the impact of his principle on those who ultimately remain in entry-level positions. (That is the general conceit of the Dilbert comic, after all.) Most if not all of us have experienced frustrations with supervisors who just didn’t seem to “get it,” so whatever the underlying reasons for inefficiencies in hiring and promotion may be, organizations and those who constitute them have a vested interest in getting the decisions right.

(2) See, for instance, Eric H. Kessler, “The Idols of Organizational Theory: From Francis Bacon to the Dilbert Principle,” Journal of Management Inquiry 10, no. 4 (December 2001): 285-297, though if you really want more suggestions, I’ve got pages of citations.